The Plateau state government, has concluded plans to retain 4,850 volunteers serving in the state under the federal government N-Power scheme.


The category of volunteers to be retained are those serving as teachers on the expiration of their tenure later in the year.

The development was confirmed on Wednesday, 22nd March  in Jos by the executive chairman of the State Universal Basic Education Board (SUBEB), Mathew Sule. 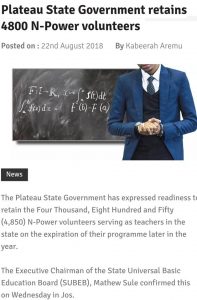 Congratulations to the N-Power Teach Plateau volunteers, the State Government has made it official that it will be retaining the teach arm in efforts to improve the standard of education in the State.